Akansha Ranjan Kapoor is all set to mark her debut in the upcoming Netflix film titled Guilty, which is all set to release tomorrow. And the first one to cheer for the debutante is none other than her best friend Alia Bhatt. Recently, a special screening event was held in Mumbai, where the actress arrived to support and motivate her bestie. At the event, the two were seen posing together and giving BFF goals in mini dresses. While Alia looked stunning in a lavender dress, Akansha, on the other hand, opted for a printed dress. So, let us take a close look at their outfits and decode it.

Alia Bhatt In A Lavender Dress

It was the best day for Alia Bhatt as she not only attended the premiere of her best friend Akansha Ranjan Kapoor's debut film, but also sported the dress of Summer Somewhere, which is the brand of her another best friend Meghna Goyal. It was a full-sleeved V-shaped neckline lavender-hued dress that featured knotted belt. The actress completed her look with a pair of yellow heels and went accessory free. Alia let loose her mid-parted tresses and sharply contoured her T-zone, cheekbones, and jawline. Filled thick brows, soft kohled eyes, curled lashes, highlighted cheekbones, and light pink lip shade spruced up her look.

Akansha Ranjan Kapoor donned a bishop-sleeved V-shaped neckline midnight blue-hued dress, which was accentuated by white floral patterns and silver sequin detailing at sleeves end. Her waist was cinched and featured a matching panel that added dramatic quotient to her look. The diva completed her look with a pair of black heels and accessorised her look with silver-toned earrings. Akansha Ranjan left her mid-parted sleek tresses loose and wrapped up her look with slight contouring marked by filled brows, kohled eyes, shiny eye shadow, highlighted cheekbones, and pink lip shade.

We absolutely loved the outfits of Alia Bhatt and Akansha Ranjan Kapoor. What do you think about it? Do let us know in the comment section. 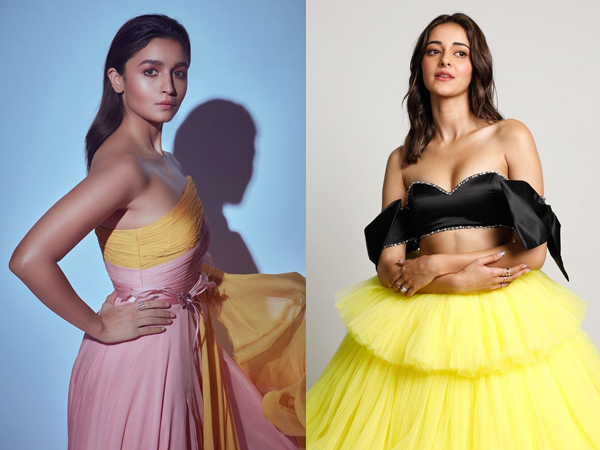