On Friday, 27 September, people from all corners of life gathered in front of the Town hall, Bangalore, demanding justice for climate inaction. Orchestrated by Fridays For Future Bangalore with the support of Jhatkaa.org and Extinction Rebellion (XR) Bangalore, the peaceful demand for action witnessed the support of 700 and more people.

FFF also #FridaysForFuture is a movement that began in August 2018, after 15 years old Greta Thunberg sat in front of the Swedish parliament every school-day for three weeks to protest against the lack of action on the climate crisis. Flash forward 1 year and few months, the movement has gained massive momentum globally. 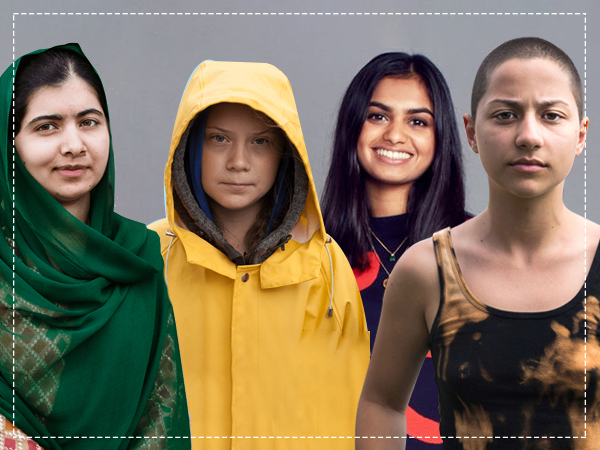 She Is Change: 6 Young Female Activists Who Are Changing The World

The World Climate Week, which began on 20 September concluded on 27 September with protesters irrespective of their age and background joined hands and marched from Nayana Auditorium to the city Town Hall.

FFF Bangalore came together in the early stages of 2019 with 6 members and have now bolstered into a massive impactful bunch (comprised of students and young working professionals) who organise plogging parties, plantation drives, lake-clean ups & environment-conscious discussions and screenings.

Disha A Ravi, coordinator of Bangalore chapter of FridaysForFuture said, "The strike aims to highlight the urgency of the climate crisis that is impacting the world and, more locally, our city."

She continued, "It has a three-fold agenda: Spread awareness, urge the government to tell the truth, and act now for climate justice, making sure to keep affected people and experts in the conversation. It is essential that it happen on Friday to show solidarity with the global climate champions and concerned citizens who are taking to the streets. Students across the world will be speaking out. India shouldn't be left behind", and the dedication and energy of the bunch were indeed contagious.

A post shared by FridaysForFuture Karnataka🌏 (@fridaysforfuture.karnataka) on Sep 28, 2019 at 10:06am PDT

The peaceful march for climate justice was joined by MLA Soumya Reddy, who encouraged and motivated the march-goers. On Friday, Bangalore Town Hall was engulfed in a special kind of energy, where hundreds of people with the same goal showed that "alone we can do so little, together we can do so much".

Fridays For Future was recently awarded the Amnesty Ambassador of Conscience Award 2019, for which Greta responded with, "This award is for all of those millions of people, young people, around the world who together make up the movement called Fridays for Future. All these fearless youth, fighting for their future. A future they should be able to take for granted. But as it looks now, they cannot."

With conscious and woke groups such as FFF and alike, there is indeed a glimpse of hope for a better tomorrow!