The biggest epic Mahabharata, is undoubtedly a source of inspiration for all those who find it difficult to deal with the common problems of life. It is a like a light while one undergoes a dilemma. Be it the problems associated with personal or even those of professional life, even one quote from Lord Krishna can show the way. That is one of the reasons why the epic Mahabharata is a widely read book. It is read even by those who are not very firm believers of religion.

Pandavas Wanted To Make Peace With The Kauravas

When both the teams had agreed that they should go for a war for the throne of Hastinapur, the kind heart of the Pandavas melted at once, and they felt that peace must be given a chance. They thought of making peace with the Kauravas and planned that they should consider a peace treaty with them. Lord Krishna wanted to visit Duryodhana with a proposal of peace. Hence, all of them consented on sending Lord Krishna as the messenger of peace, to the Kauravas. 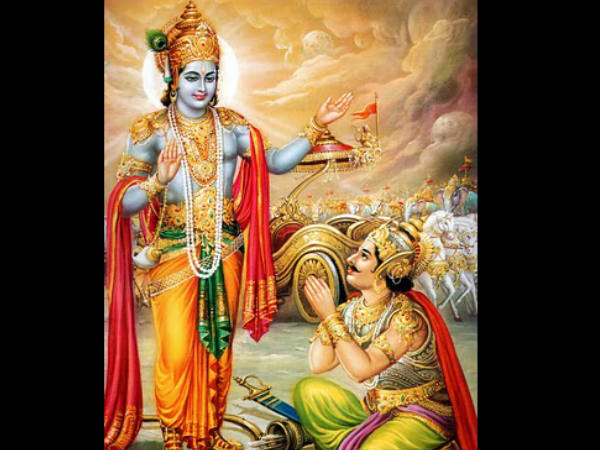 Most Read: 18 Lessons From Mahabharata That Will Leave You Inspired For Life

Lord Krishna headed towards the Hastinapura. Since, the journey was going to be long and tiresome, he decided to wait at Kushasthala before going to Hastinapur directly. Lord Krishna, the witty diplomat, had all his plans in mind about meeting the Kauravas. After having taken adequate rest and decided on his plans for the meeting, he started for the capital city of the Kauravas.

When the initial rituals had been performed, Duryodhana requested Lord Krishna to have food with them and take rest during the night, at their place. It was only on the next day that they were going to discuss the peace treaty. However, it came as a surprise to them that Lord Krishna rejected their proposal of dinner. Instead, Lord Krishna stayed at Vidura's house at night and ate with him.

Vidura was a half-brother to the Pandavas and Kauravas, born upon the union of sage Vyasa and the handmaiden of the queens Ambika and Ambalika. He was the only man who raised a voice against it when Draupadi was being humiliated in the court of the Kauravas.

Lord Krishna had sensed it that the Kaurava brothers wanted to lure him through their luxury, when they requested him to stay for a night and have food with them. However, there would not be any ulterior motive when Vidura served him food.

The next day during the meeting, Duryodhana asked Lord Krishna why he declined his proposal of marriage and ate at Vidura's house. To this Lord Krishna replied saying,

Translation: One should not eat food at the house of those who hate us, neither should we offer food to them,

He further said ''Pandavas are highly virtuous men, the followers of righteousness. The one who hates them, hates me as well; and who loves them sends his love to me''. Lord Krishna thus did not want to eat at the house of those who never thought good of the Pandavas. Hence, the teaching that one should neither eat at the house of those who hate us, nor should one offer food to them.