Maha Shivratri, the most important festival to worship Lord Shiva, falls on the 14th night of the new moon during the dark half of the month of Phalguna (Feb/March). This year it will be observed on 21 February. Praying to Lord Shiva on Maha Shivratri helps to overcome ignorance, enlighten knowledge, and get the supreme power to know the universe.

On this occasion, we are here to tell you the stories associated with the origin of Maha Shivaratri. Most festivals in India have a couple of stories and legends associated with them. The festival of Maha Shivratri is no exception to this rule. There are many stories related to Maha Shivratri that people believe and celebrate, with minor differences from region to region. Not only the story behind Maha Shivratri, but also the way people celebrate the festival goes through slight differences from one region to the other.

The Story Of Samudra Manthan

Once upon a time, the Devas and the Asuras decided to churn the 'Ksheera Sagar' - the ocean of milk. This was to bring out 'Amrut' - the celestial nectar. Amrut had the ability to make people immortal. Mount Meru was selected to be the churner and Lord Shiva's Snake - Vasuki was to be the rope to be used to churn. The Devas held the tail and the Asuras the mouth of the snake.

Also Read: Things You Should Do On Maha Shivratri

As the churning began, Vasuki started spewing 'Halahal' - a terribly poisonous venom that could destroy the world. To save the world from destruction, Lord Shiva collected and drank it. Goddess Parvati held Lord Shiva's neck, so that the poison would not be swallowed and Lord Vishnu held his mouth closed to make sure that the poison does not spill out.

The poison gradually started showing its effect in Lord Shiva's neck and the neck turned blue. This gave Lord Shiva the name 'Neelkanth'. It is said that the water of river Ganga was then used to soothe the body of Lord Shiva. It is to commemorate this sleepless night, that Maha Shivratri is celebrated across India where devotees keep fasts and stay awake the whole night.

The Story Of Lord Brahma And Lord Vishnu

Once Lord Brahma and Lord Vishnu got into an argument about who was the mightier between them and the mightiest in the universe. The fight grew intense and the gods asked Lord Shiva to intervene. Lord Shiva appeared as a huge fiery beam of light. The beam was so humongous that its ends could not be seen. Lord Brahma and Lord Vishnu decided that whoever finds the ends first shall be declared the most powerful.

Lord Brahma took the form of a swan and flew upwards and Lord Vishnu took the form of a boar and dug his way underground. They went a long way but still could not find the ends. As Lord Brahma flew upwards, he saw a Ketaki flower. The flower said that it came from a place near the head of the beam. Lord Brahma returned with the flower to the meeting point and presented it as proof that he had found the head of the beam.

It was then that Lord Shiva appeared and cursed Lord Brahma that he would never be worshipped by the humans. Ketaki flower was also cursed that it would not be used ever in pujas of any kind. It is believed that Lord Shiva appears as a beam on the 14th day of the dark phase of the moon in the month of Phalguna. Thus, Maha Shivratri is celebrated since then, on this very day. 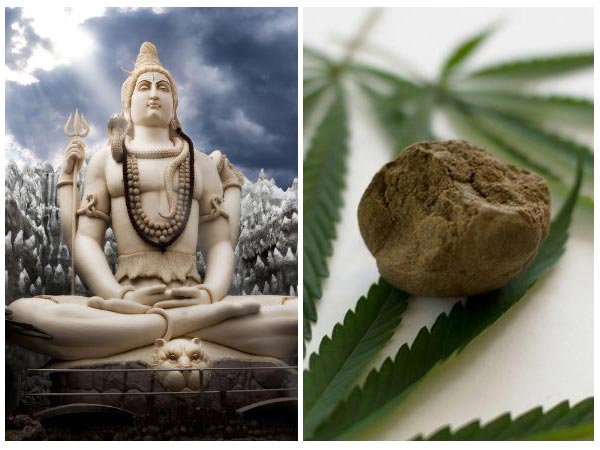 The Story Of The Tribal Man

There was a tribal man who once ventured into a forest to collect firewood. He went too far into the forest and lost his way. The night fell and the wild animals started making terrifying sounds wandering in search of food. Scared, the tribal man climbed a tree. As the time passed, he started feeling sleepy. He was worried that he would fall asleep. Thinking that if he falls asleep, he might thus fall down on the ground, he started plucking the leaves of the tree and counting them just to avoid sleeping.

However, A lion saw the man and came towards him. He was so frightened that he started crying. Afraid, the man closed his eyes and thought his end was near as the lion would eat him. But when nothing happened for some time, he opened his eyes and to his surprise, the lion had gone. Confused why and where the lion went, he thought for a while but later resumed to picking the leaves of the tree one by one and started dropping them down once again. Thus, he spent the night safely.

The next morning, as he climbed down the tree, he saw in the daylight that the tree he had climbed was a Bilwa tree and below it, there was a Shiva Linga. He had dropped a thousand Bilwa leaves one by one on the Shiva Linga.

Lord Shiva then appeared and granted the tribal man good wealth and divine bliss and it took him no longer to understand that it was all because of his blessings that the lion went off without causing any harm to him. Since that day, Maha Shivratri is celebrated every year by observing fast and abstaining from sleep.