"You are just a child, what do you know about the world?" - This statement is cancelled! Yes, it is the twenty-first century and the new generation is no longer comfortable sitting in their homes, protected by the four walls. They are out on the streets, they are raging in the UN, they are questioning everything that is wrong with this world.

And it does not stop there, the new era of young activists are deeply connected and concerned with the social, political and environmental issues - fighting the war against the evils for you, me and the whole world [1] [2] . Self-less and veraciously determined, the young are indeed a force to be reckoned with. 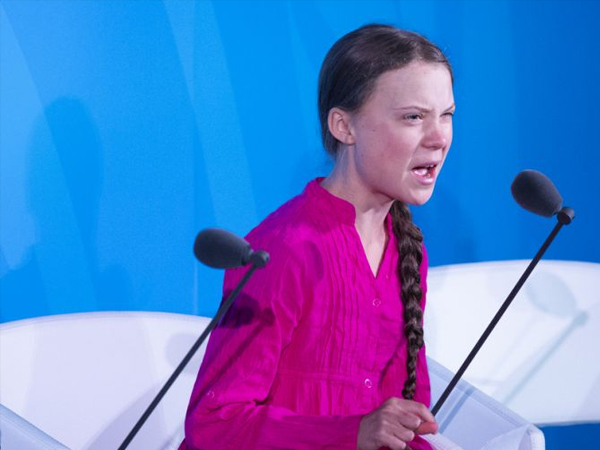 Today, we take a look at the resolute female voices that are assiduously fighting for a change - for a better tomorrow.

In August 2018, when she was 15, Greta Thunberg staged her first-ever solo strike outside the Swedish parliament on a Friday, holding up a sign calling for stronger climate action. Now 16, the Swedish young girl rose to the accolade of a climate activist, with thousands and lakhs of students and adults engaged in similar protests in their communities.

"Since our leaders are behaving like children, we will have to take the responsibility they should have taken long ago," Greta told a UN climate change summit last year.

Greta teamed up other students, giving birth to one of the most influential and largest school strike movements, 'Fridays For Future', where the students joined her by walking out of their classrooms to protest against climate change inaction .

Time magazine named Thunberg one of the world's 25 most influential teenagers of 2018. Swedish Woman of the Year 2019, Nobel Peace Prize nomination, 2019 Freedom Prize, Time Magazine: 100 Most Influential People of 2019 and Amnesty International: Ambassador of Conscience Award are some of the few accolades in the young climate activist's name.

In February 2018, the world was shaken by the Parkland School Shooting that claimed the lives of 14 students and 3 staff members. Born in 1999, (then) 18-year-old Emma Gonzalez, was held for two hours in the school auditorium with several other students, while one of the most tragic and horrifying school shooting in the history took place in her school.

Refusing to be crushed by the tragedy that took the lives of her friends, Gonzalez along with other survivors began a national campaign to try to end gun violence. She emerged as one of the leaders of the movement and co-founded the gun-control advocacy group Never Again MSD.

Her powerful speech during the March for Our Lives in Washington, D.C. caught world-wide attention, where she proclaimed "We call B.S." on the lack of action by politicians funded by the NRA.

She was only 11 when Malala wrote and published an anonymous diary about her life in Pakistan under the Taliban rule. The wide acclaim and attention on the book, along with her father's support gave her the voice to speak out more publicly about the need for access to education for girls.

It was in 2012, a Taliban gunman shot Yousafzai in the head as she rode home on a bus and it changed her life, along with the lives of thousands of girls around the world, whom she is fighting for.

The assassination attempt instead of scaring young Malala fuelled her fire and in 2014 she became the youngest person ever to win the Nobel Peace Prize aged 17. Anne Frank Award for Moral Courage, Mother Teresa Awards for Social Justice, Order of the Smile are some of the few accolades to her name .

When she was 17, the British activist Amika George founded #FreePeriods. Inspired by an article about a charity that provides menstrual products to girls in Africa and about how many poor British women missed school due to stigma around menstruation or being unable to afford sanitary products such as tampons, young Amika George started the petition directed at Westminster and gained over 200,000 signatories.

The protest organised outside Downing Street pushed and pressurised the government in the right direction and in March 2019, the UK government announced that it would be funding free sanitary products in all English schools and colleges.

In 2006, one Little Miss Flint wrote a letter to President Barack Obama, noting out Flint's ongoing water crisis. Then 8-year-old Amariyanna requested to meet with the then POTUS but her trip to Washington did not end with the meeting she had hoped for.

Her enthusiasm and dedication to bringing forth a positive change in her community got the right amount of attention and later received a call from the White House and met with Obama on his next trip to Flint.

Apart from her undivided effort in raising awareness about Flint's ongoing water crisis, Little Miss Flint also works towards raising funds to support underprivileged children in her community and across the country. Amariyanna has also become a youth ambassador for the Women's March .

One of the most influential and prominent names in the fight for equality, 18-year-old Jazz Jennings is one of the youngest trans people in the public eye. An LGBT rights activist, Jennings co-founded the TransKids Purple Rainbow Foundation to help transgender children, along with her parents. And in 2013, she launched Purple Rainbow Tails to raise money for the same cause .