The moment you hear the word cinnamon, you tend to associate it with the sweet, and woody aroma it gives out. Cinnamon is a spice obtained from the inner bark of the tree, Cinnamomum verum.

Commonly known as 'dalchini' in the Indian sub-continent, cinnamon is a rich source of antioxidants [1] , has antimicrobial and anti-inflammatory properties, and other compounds. This makes cinnamon the world's best spice.

What Is Cinnamon Milk?

By flavouring the milk with cinnamon, you get cinnamon milk. In Ayurveda, it is widely used to cure an array of ailments. But apart from that, it enhances the flavour of milk. Cinnamon milk is the quickest, easiest and one of the most common drinks.

Cinnamon is rich in calcium, fibre, vitamin B6, magnesium, iron, vitamin A, carbohydrates and vitamin C. Milk, on the other hand, is packed with calcium, magnesium, cobalamin, potassium, sodium, and carbohydrate.

Adding a pinch of cinnamon to your food or beverage not just adds to the taste, but its also known to have plenty of health benefits. 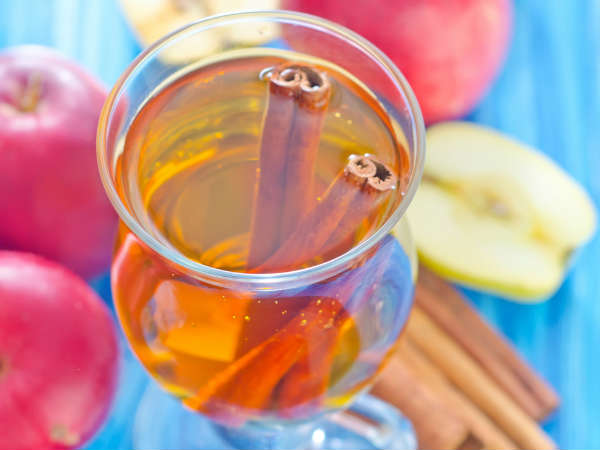 Cinnamon contains essential oils that protect the mouth from certain strains of bacteria which cause bad breath, cavities, tooth decay, and mouth infections. The essential oil has antibacterial properties that can help combat mouth bacteria according to a study. Cinnamon oil inhibits the growth of Streptococcus mutans, the bacteria which causes dental plaque [2] .

Cinnamon has the ability to lower blood sugar levels and improve insulin sensitivity. Drinking cinnamon milk after meals decrease the amount of glucose that enters the bloodstream after a meal. Cinnamon works by breaking down the carbohydrates in your digestive tract slowly [3] .

Cinnamon milk has the potent ability to fight against various bacteria, virus and fungal infections [5] . Cinnamon contains a compound called cinnamaldehyde which helps in fighting various infections. The essential oils and the antimicrobial, antiviral, antifungal and antibiotic properties of cinnamon surely make it a wonder spice [6] .

Drinking cinnamon milk every day can give you stronger and healthier bones. Because both milk and cinnamon contain good amounts of calcium[7] . 100 grams of cinnamon contains 1,002 mg calcium and 100 grams of milk contains 125 mg calcium. Calcium will help build and maintain strong bones, protect your heart, muscles, and nerves and even help in the better absorption of other minerals.

Drinking a warm glass of cinnamon milk work wonders when you are suffering from cold. The drink can bring relief from the allergy symptoms like headache, sneezing, and dizziness associated with cold. In addition, it can also fight common allergy symptoms and histamine reactions in the body [8] .

Alzheimer's and Parkinson's are both neurodegenerative diseases that lead to the progressive loss of the function of brain cells. Cinnamon contains two compounds which stop the build-up of a protein called tau in the brain, which is the cause of Alzheimer's disease [10] . The spice also aids in protecting the neurons and improving motor function associated with Parkinson's disease [11] .

Side Effects Of Cinnamon Milk

Cinnamon can cause an allergic reaction in some people. Breathing, eating or touching the spice could cause allergic symptoms like mild sneezing, wheezing, itching in the mouth, abdominal and vomiting to name a few. Also if you are lactose intolerant, a glass of milk causes an allergic reaction like abdominal pain, diarrhoea, and gas.

So, if you are allergic to both these ingredients avoid drinking cinnamon milk.