The grand finale of Bigg Boss 14 was a three-hour long affair and now it has finally come to an end. While TV actress Rubina Dilaik was declared as the winner of the season, singer Rahul Vaidya, took the second spot. After the show, along with Rubina and Rahul, the other finalists namely, Nikki Tamboli, Aly Goni, and Rakhi Sawant posed for the paparazzi in their stylish outfits. No doubt, they all were dressed in their best numbers and looked very impressive. So, let us take a close look at their outfits and decode it.

Rahul Vaidya In A Black Suit And Printed Blazer

Rahul Vaidya, who is the first runner up of Bigg Boss 14 made heads turn with his stylish appearance in a black suit and printed blazer. His suit consisted of a long-lapel black blazer and plain black pants. He layered his blazer with a classic white shirt and sported a bow tie. The singer topped off his black suit with a full-sleeved one-buttoned golden-hued blazer, which was accentuated by intricate patterns and subtle sheen. Rahul completed his look with a pair of white shoes and wrapped up his look with moustache and half beard.

Nikki Tamboli turned out to be the second runner up of the show but when it comes to fashion, she surely was one of the best dressed contestants. For the finale, the diva was dressed to slay in a shimmering grey gown, which was accentuated by heavy sequins and stones detailing. The long-slit sleeves and the thigh high side slit, added stylish quotient to her look. Nikki's gown featured a long floor-sweeping train that added to dramatic quotient. She notched up her look with a silver-toned chain bracelet and spruced up her look with sharp contouring marked by filled brows, black kohl, black eyeliner, heavy mascara, highlighted pink cheekbones, and pink lip shade. The diva let loose her side-parted blonde curled locks and looked gorgeous as ever.

Aly Goni was the second contestant to be out of finale race. But he did impress us with his stylish avatar in a three-piece black suit. His suit consisted of a sleeveless waist-coat, plain black pants, and full-sleeved open-front blazer, which featured shimmering accents. He layered his waist coat with a classic white shirt and a black bow tie and sported a black belt. The actor completed his look with a pair of nice black shoes and upped his look with a few accessories.

Rakhi Sawant, who became the first contestant to be eliminated from the finale race, was dressed in a white ethnic ensemble. Her outfit consisted of a full sheer sleeved round-collar white long flared kurti that was accentuated by intricate black prints and a front slit. She teamed it with a high-waist same-patterned skirt, which featured golden border. The actress accessorised her look with a pair of earrings and a necklace and rounded out her look with sharply highlighted face, pointed brows, kohled eyes, heavy mascara, and light pink lip shade. She let loose her side-parted curled locks.

So, what do you think about the stylish looks of the contestants? Let us know that in the comment section. 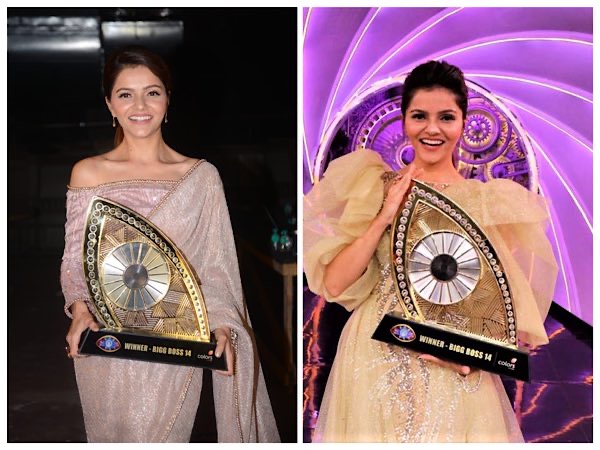