In Hinduism, the name of Goswami Tulsidas is quite significant. He is considered to be a learned sage and the author of the epic Ramcharitramanas. Ramcharitramanas consists of the life and story of Lord Rama in the form of a poem. It re-tells the events that took place before and after the birth of Lord Rama along with what happened throughout his life. Every year his birth anniversary is celebrated on the Saptami Tithi of Shukla Paksha, in the month of Sawan.

This year the date for Tulsidas Jayanti falls on 27 July 2020. So on the birth anniversary of Goswami Tulsidas, we are here to tell you some facts about him.

Also read: Nag Panchami 2020: Things You Need To Do And Avoid Doing On This Day

1. It is believed that Tulsidas Lived during the years 1497- 1623 BC. Though there is no fixed record of his birthplace, people believe that he was in Chitrakoot, Uttar Pradesh.

2. It is believed that after Tulsidas was born, instead of crying he spoke Rama word. Due to this, he was nicknamed as Rambola. Moreover, he had teeth and looked just like a five-year-old boy.

3. He was only four days old when his father passed away due to some illness. Soon after this, the mother of Rambola too passed away.

4. Chuniya, the maidservant of Rambola's mother, then started to take care of him as her own son. But she too passed away when Rambola was just five and a half years old.

5. Rambola then used to wander as an orphan from door to door begging for alms. It is then that Goddess Parvati disguised as a Brahman came to take care of Rambola.

6. He started to learn in Ayodhya and it is there he came to know about Lord Rama and Ramayana.

7. In Ramcharitmanas, Tulsidas has mentioned that his Guru used to narrate him Ramayana and this is how he came to know more and more about Lord Rama.

8. At the age of 15, he went to Varanasi. He then started to study Hindi literature, Sanskrit grammar, Vedas, Vedangas and Jyotisha from his Guru Shesha Sanatana.

9. After completing his studies, Tulsidas came back to his hometown Chitrakoot and started to live there. He also narrated Ramayana to the villagers.

10. Soon he was married to Ratnavali, the daughter of Dinbandhu Pathak who lived in a village named Mahewa. The couple was blessed with a son but unfortunately, the boy couldn't survive.

11. There's a story that one day Ratnavali went to her father's place while Tulsidas was away. He had gone to a nearby Hanuman Temple. After he returned home, he couldn't find his wife and therefore, he started to search for her.

12. He then swam a long river to reach to his father-in-law's place and meet his wife. But this didn't please Ratnavali. She told him to dedicate himself to God and leave behind the materialistic thoughts and desires.

13. Tulsidas realised that he should dedicate himself entirely to God and thus he renounced his Grihastha life. He then went to Prayagraj and became a sadhu. However, some historians believe that Tulsidas wasn't married and he was a sage from his childhood days.

14. Tulsidas is quite famous for his work in the field of art and culture.

15. He is also known for retelling Ramayana in Awadhi, a dialect of the Hindi language. The original Ramayan was written in Sanskrit by Maharishi Valmiki. 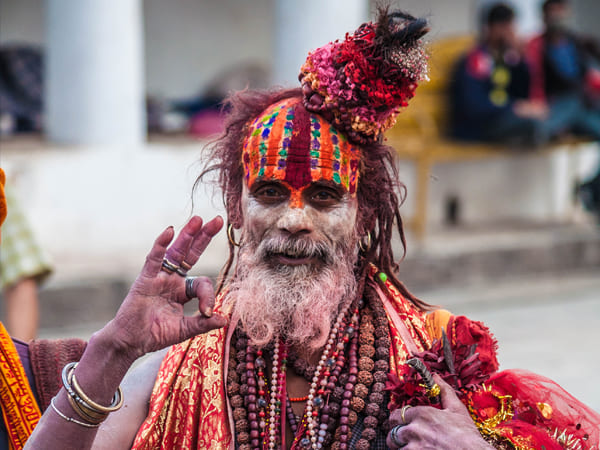 16. In Ramcharitmanas, Tulsidas has mentioned how he met Lord Rama and Hanuman. Many people consider him as an incarnation of Maharishi Valmiki.