The name Kushmanda is a combination of two words - Ku and Ushmanda. Here 'Ku' means little and Ushmanda means beautiful. It basically means the one who created this universe as a 'beautiful little place'. It is believed that when the universe did not exist, there was complete darkness everywhere. Then the Goddess smiled and the darkness was eliminated. Therefore, Devi Kushmanda is believed to have created this universe with her divine smile.

According to the Durga Saptashati, Goddess Kushmanda is the one who controls the functioning of the solar system. The core of the Sun is believed to be the residence of Goddess Kushmanda. She is the one who provides the energy to the Sun to shine and emit light. Goddess Kushmanda is depicted as an eight-armed Goddess. In seven of her hands, she holds a kamandalu, bow, arrow, lotus, a jar of nectar, mace and a discus. With the eighth hand, she holds a rosary which has all the eight Siddhis and nine Niddhis. She rides a lion which represents 'Dharma'.

Significance Of Each Day In Navratri

It is believed that if one worships Devi Kushmanda on the fourth day of Navratri, he/she is blessed with good health, prosperity, fame and strength. The puja begins with worshipping the Kalash. All the other Gods and Goddesses are invited to the Kalash. Then chanting of the mantra for the Devi starts. The Goddess also loves the sacrifice of a pumpkin. Hence, one can sacrifice a pumpkin before the Goddess.

The mantra chanted for Devi Kushmanda

So, worship Goddess Kushmanda today and get blessed with inner strength, good health and prosperity. 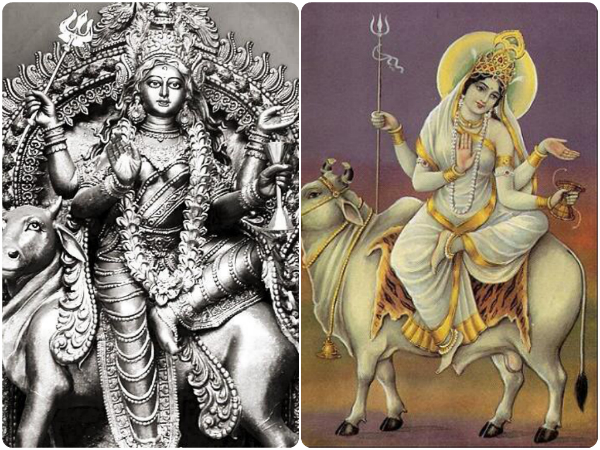