Chhath Puja is an important Hindu festial observed mainly in the North-Eastern parts of India. The festival is dedicated to Lord Surya (Sun). People observe this festival in order to thank the deity for blessing the earth with His powerful and essential sunrays.

The four day long festival marks the harvest season of Kharif crops and happiness of the farmers after seeing their grain stock. This year Chhath Puja will begin on 18 November 2020 and will end on 21 November 2020. Today we are here to tell you some interesting facts related to this festival. Read on: 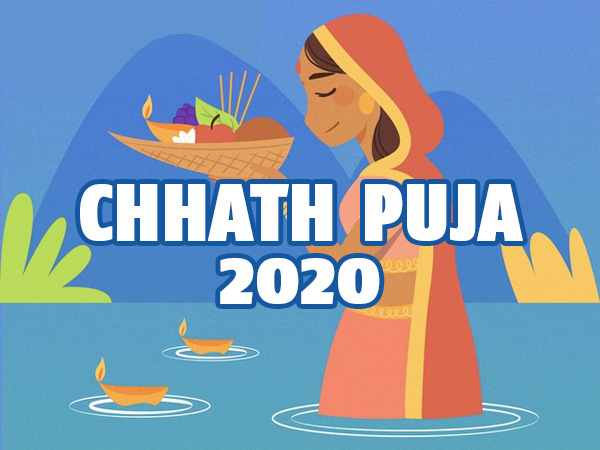 Chhath Puja 2020: Quotes, Wishes And Messages To Share With Your Loved Ones

1. Chhath Puja is dedicated to Lord Surya as a thanksgiving for bestowing life on earth.

2. The festival is one of the biggest festivals observed in Bihar and Jharkhand. It is also observed in West Bengal and in some parts of Uttar Pradesh.

3. It is a four day festival that begins five days after Diwali.

4. Those who observe fast during this festival are known as Vrati. They fast for four days and offer Arghya to Lord Surya.

5. Chhath Puja is considered to be the most auspicious festival and therefore, people clean their houses and utensils thoroughly during this festival.

6. Utensils made up of copper are used to make prasad for Chhath Puja.

7. Unlike many other Hindu festivals, Chhath Puja isn't only observed by women for the sake of their husband's long and healthy life.

8. Chhath Vrati pray for four days and offer Arghya to Lord Surya on the bank of a river or pond for two days.

9. The festival begins with Nahaye Khaye on the first day which is basically about eating only after taking a bath and worshipping the Hindu deities and ancestors.

10. The second day of the festival is known as Kharna and on this day Vrati do not eat anything except during the night. They consume only kheer, roti, raddish and banana on this day. After this they fast for another two days.

11. The third day is known as Pehla Arghya or Sandhya Arghya. On this day, prepare thekua and other sweets for Chhath Puja.

12. The fourth day is known as Doosra Arghya and on this day people offer the last Arghya to Lord Surya and seek His blessings.

14. Chhath Vrati breaks their fast on the fourth day after giving Suryodaya Arghya to Lord Surya. They break their fast by consuming the Chhath Prasad, fruits, kheer, lemonade and thekua (a special dish prepared during the Chhath Puja).

16. The festival is so important for people belonging to Bihar and Jharkhand that they observe this festival with utmost dedication and harmony.

17. No matter in which part of the world they reside in, these people always celebrate and enjoy this festival.

18. Both men and women observe this festival in order to thank Lord Surya and seek blessings for their family members and loved ones.

19. People prepare meals during Chhath Puja by avoiding onion and garlic. They stricty follow the rules of abstinence during this festival.

20. People live a simple and pious life during this festival and engage themselves in worshipping the Lord Sun.

21. Meals and Prasad are offered to everyone who comes to one's home, regardless of their religion, caste, race, class and gender.