Seems like there's no end to the judgment and awful remarks that women get to hear. No matter what she does, a woman often undergoes a tough time breaking the stereotypes to be who she wants to be. Whether or not she lives up to the standards and parameters set by society, she gets to hear several negative things. If you are wondering what could be those things that are negative and discouraging for women, then today we are going to tell you about the same. This International Women's Day, we are here with a list of sexist things that women often get to hear. Scroll down to read more. 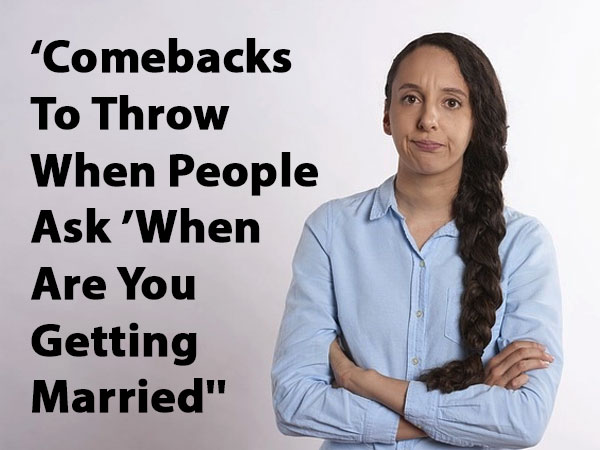 Comebacks That Can Come Handy To 'When You're Getting Married' Question

Women are often told which posture they should sit in. There could be times when they may be forbidden to sit in a position that seems comfortable and relaxing to them. Thanks to the patriarchal mindset and widespread gender stereotype in our society.

2. "You Have So Much Of Body Hair. You Should Wax Regularly."

Humans have body hair all over their body and there's nothing wrong with this. In fact, those who think having body hair is a shame, especially for a woman should probably take biology classes. Instead of insisting on a woman to wax her body hair, can we just let her decide the same?

Neither drinks were ever made exclusively for men nor they define a woman's character. Whether or not one wants to drink should be that person's choice, without gender being the deciding factor.

Those who think women aren't good drivers, need to go through the list of women pilots, loco-pilots, astronauts, sailors and cab drivers. Moreover, if one looks at the facts and figures then most of the accidents are caused by male drivers!

5. "You Won't Be Able To Understand The Technical Aspects."

Technology has nothing to do with a person's gender. Anyone irrespective of his/her gender can understand the technical aspects and functionality of anything. In fact, if you look closely, you will find numerous women who are leading the IT industry efficiently.

The moment a woman enters her twenties, people around her get eager to find her a suitable groom. These people often believe that a woman should get married at the right age else no one would marry her and what on the earth would a single woman do? Therefore they are always on their toes to know when and whom she is getting married to.

7. "Why Don't You Want Kids? Kids Will Make You A Complete Woman."

Having kids is not a joke. One needs to dedicate his/her entire time to the kids until they grow up. Instead of always asking a woman why she isn't having kids, let her decide the same. Once a woman feels mentally, physically and emotionally ready to become a mother, she would have kids. Society shouldn't pressurise her for the same.

How does applying makeup make someone look like a woman? One could apply makeup to enhance his/her beauty and that has nothing to do with looking like a woman. Just because she is a woman, that doesn't mean she will always apply makeup. In fact, she would apply the makeup, when she feels like applying it.

9. "You Don't Know How To Cook, How Will You Manage After Getting Married?"

Just as you are managing to live your life happily while poking your nose into others business. The widespread patriarchal mindset has made us believe in the notion that it is a woman's duty to cook, especially when she gets married. The mindset has always associated cooking with women as if they were born to cook.

10. "You Are Going Alone At Night. How Will You Ensure Your Safety?"

If the 'Damsel-in-distress' has made you believe that women can't ensure their safety then you need to have a reality check. While going out late at night while people with a sick mindset are roaming can be unsafe, women have gone through a lot to know how they can protect themselves. In fact, you should try to make the world a safer place for women to live in.

11. "You Should Give More Priority To Your Children Than Your Work."

Probably, your mother should have focused on her work instead of having you as her child. It's high time when society needs to understand that not all women want to sit back and have kids as soon as they tie the knot. Instead of deciding what she should do, kindly mind your business and let her live the way she wants to.

12. "Did Your Husband Allow You To Work After Getting Married?"

Whether or not she wants to keep working after getting married should be the decision of the woman. Her husband may give his suggestions and opinions but he is no one to decide if she would work. Those who think otherwise, need to upgrade their mindset.

Because you are being like those who always judge women according to the gender stereotypes. As a human, a woman can have her own opinions and choice and be vocal about what she feels. When a woman calls herself a feminist, rather than mocking her, appreciate her for fighting against the atrocities faced by women.

14. "You Would Look Prettier If You Lose Weight."

A woman is pretty irrespective of being fat, thin, dark-skinned, fair complexioned, tall or short. If a woman is confident in her own skin then you shouldn't be giving her unsolicited opinions for losing or gaining weight or using any particular cosmetic. In fact, you need to appreciate her for loving herself and accepting her flaws with confidence.

Why can't a woman love sports? If you still don't believe that women can love to watch and participate in sports, then you need to know that they are several men who do not enjoy sports at all. So what would you say for those men?

The world has already had its share of critics. Be someone who appreciates things around him/her. A woman too has the right to live her life the way she wants to and that doesn't make her less woman. It's high time when we need to be more accepting towards women, their choices and preferences without judging them or giving unsolicited opinions.