You may want him to make you feel loved and special but then you are unsure whether he wants to be with you. At times he may send you a sweet text enough to make you blush but then at the next moment, he gives you silent and cold treatment. This can surely confuse you and seem exasperating to find out whether he is interested in you or not. To help you with this, we are here with some helpful tips for you. Scroll down to read more. 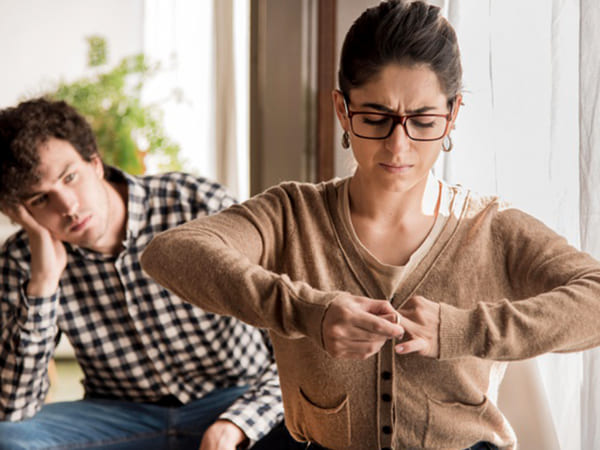 Also read: 12 Red Flags In A Relationship That You Must Never Ignore

1. He Never Calls Or Texts You First

Believe it or not, if a guy is into you, he will try his best to contact you all the time. He will text and call you and would find ways to communicate with you more often. But if he never calls or texts you, even when he isn't busy and has some spare time, then this could be a sign that he doesn't like you. He may not call you back after he missed receiving your calls or couldn't respond to your messages.

This could be another sign that he doesn't like you at all. He will always cancel out the plan. The moment you make any plan and ask him to show up, he may give you a hundred reasons telling why he can't come. There can be times when he may be genuinely busy or have some other important work to do. But if he always cancels the plan and never tries to reschedule it, then you can take it as a sign that he isn't into you.

The moment you confront him why he didn't call or text you back or what's the reason behind cancelling plans, again and again, he may make some vague excuses. He may tell you that his cat is having a fever or he accidentally broke a vase. Even if you are sitting together and sipping coffee, you will find him making excuses to end the meeting as soon as possible.

4. He Never Tries To Spend Time With You

Like we said above, he will either cancel the plans or will make excuses to avoid hanging out with you. At first, you may think that he is genuinely busy and therefore, he couldn't make it. But what if he never tries to spend time with you? Ask yourself, does he make any plan to meet you or hang out with you? Does he feel excited to meet you after a week or so?

5. He Often Mentions Other Women

You may find him mentioning other women, even when he is with you. Not only this, but he may also seek advice from you on dating other women. Or he may ask you if your girl friends like him or not. He may ask you about how to impress one of your friends or if you could introduce him to her. He may mention that he fancies one of your friends and wants to take her on coffee or dinner.

6. He Is Never Jealous Of Your Male Friends

If a guy is interested in you, he will often feel envious of your other guy friends. He may not like some of your male friends. But if he is not at all jealous, even when you are mentioning some other guy, then there's something wrong for sure. He may not pay attention when you say that you are going to a movie with one of your guy friends or if you are invited to dinner by your guy friend. He may seem fine and wouldn't like to enquire about the guy.

7. He Doesn’t Want To Talk About His Life & Future

When a guy is interested in you, he will often discuss his life and future plans with you. He will let you know how his life's going and what challenges and problems he is going through. He will also let you know what his goals and dreams are. Why? This is because he considers you important in his life and wants you to know more and more about him. But if your guy doesn't want to share anything related to his life and future plans, then this could be a sign that he's not into you. Even if you try to talk about his life, he will change the topic or will show the least interest.

8. He Never Gives You Attention

Do you find him paying no attention to what you are saying? No matter how beautifully you dress and do the makeup, he hardly notices anything in you. This can be a clear sign that he is not into you. Not only this, but he may also seem distracted, even when you are together. You may find him going through his phone or busy somewhere else. He won't consider it important to pay attention to what you are saying or if you have done something for him. If this happens, then you need to stop chasing him.

9. He Doesn’t Show Up When You Need Him

There will be times when you may need him such as you are in a dire situation and want to seek his help. During that time, he may show you his back and would pretend to be busy in some other work. He will just prefer to walk away or turn you down. Even when things are back on track, he may not feel the need to ask how you are doing and if you need any further help. He won't even apologise for not being available when you needed his help and presence.

10. He Often Flirts With Other Women

Did he impress you through his flirting skills and charming persona? Yes, then you need to pay attention to his behaviour. Check if he is flirting with other women. Chances are that he may not leave any opportunity to flirt with any woman. He may flirt with them even in your presence and would call it a mere playful behaviour. But mind you, he may have some other plans. He may not be into you and therefore, is flirting with other women.

11. He Breadcrumbs On You

Those who don't know, breadcrumbing is a scenario where a person behaves in a weird way. He/she will show interest in you and will then make you feel left out. The person will talk to you only when he/she feels like and then he/she will ignore you until there's an urge to talk again. If your guys do the same to you and always give mixed signals such as sending you a sweet text and then giving you a cold shoulder, then you need to be alert. He may not be interested in you and would be playing with your feelings.

What Is Breadcrumbing In A Relationship? Signs That Will Help You To Know If You're Into It!

Developing romantic feelings for someone may not be in your hands but you can certainly save yourself from a bitter heartbreak. Do not chase him if he shows the above signs. Instead, you can invest your time and emotions in someone who genuinely cares about you and your feelings.