Cooking oil serves an integral part in almost all types of culinary practices and it helps bring out a distinct flavour and texture in foods. From sautéing, frying to roasting and baking, cooking oil plays an imperative role in various cooking methods.

Cooking oil plays an important role in human nutrition too. They are a good source of fatty acid compositions which play a vital role in the prevention of diseases, promote brain function, aid in the growth and development of human embryo and prevent inflammation [1].

The vegetable oils are derived from plant-based sources and these include peanut, canola, soybean, sunflower, sesame, grapeseed, olive, palm, coconut, corn and avocado oil, to name a few [1]. Some of these cooking oils are high in saturated fat which needs to be consumed in moderation.

The smoke point is the temperature at which the oil burns and smokes. Oils with a higher smoke point are ideal for deep-frying, while oils with low smoke point below 200 degree Celsius are ideal for shallow frying [2]. Reheating oils past their smoke point loses its flavour and is considered detrimental to health.

Read here to know which cooking oils are good for your health and which ones should be consumed in moderation.

• Extra-virgin olive oil has a smoke point of 191 degree Celsius, which can be used for shallow frying.

Sesame oil is high in nutrients and antioxidants. It is known to have antihypertensive and anticarcinogenic properties [6]. Consumption of sesame oil can reduce fatty acid concentration in the liver and decrease serum cholesterol levels.

Sunflower oil may help lower total cholesterol and LDL (bad) cholesterol levels and increase HDL cholesterol, according to a study [8].

• Sunflower has a high smoke point and is often used in high heat cooking.

Soybean oil contains 7 to10 per cent palmitic acid, 2 to 5 per cent stearic acid, 1 to 3 per cent arachidic acid, 22 to 30 per cent oleic acid, 50 to 60 per cent linoleic acid, and 5 to 9 per cent linolenic acid. Soybean oil is high in polyunsaturated fatty acids that can help reduce serum cholesterol levels, thereby lowering the risk of cardiovascular disease [9].

• Soybean oil has a high smoke point which makes it ideal for deep-frying.

A study showed that post-menopausal obese women with type 2 diabetes had a significant reduction in inflammation, blood lipids and blood sugar levels after consuming 8 g of safflower oil daily [11].

• Safflower oil has a high smoke point which is considered good for high heat cooking.

A study showed that 13 healthy adults who regularly were on a hypercaloric and hyperlipidic diet replaced butter with avocado oil for six days, which resulted in a marked improvement in insulin, blood sugar, total cholesterol, LDL cholesterol and triglycerides levels [12].

• Avocado oil has a high smoke point and can be used in sautéing, grilling, baking and searing. 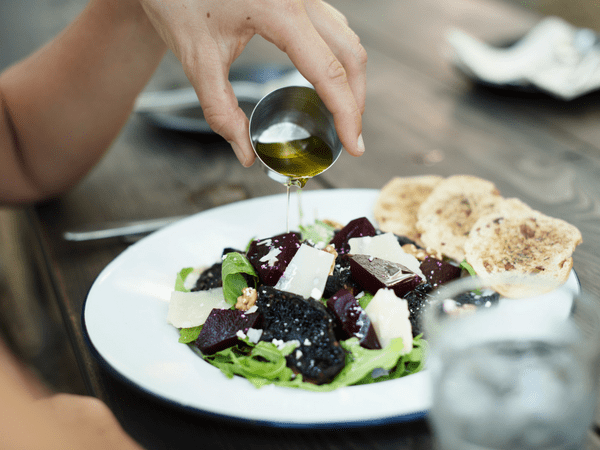 Peanut oil is rich in phytosterols that inhibit the absorption of cholesterol from the diet, lower inflammation and stop the growth of lung, stomach, ovarian, colon, breast and prostate cancer cells [14].

• It has a high smoke point of 229.4 degree Celsius which is ideal for deep-frying foods.

• Canola oil has a high smoke point, which is suitable for high-heat cooking.

• Corn oil has a high smoke point and can be used for deep-frying.

Cooking Oils To Consume In Moderation

Coconut oil is high in saturated fat which is about 92 per cent and this type of fatty acid should be consumed in moderation as studies have shown that consuming high levels of saturated fat can increase the risk of heart disease [18], [19], [20].

Another study conducted on 32 healthy participants who consumed 15 ml of virgin coconut oil daily for eight weeks was linked to a higher increase in HDL cholesterol. However, further studies are required among patients with low levels of HDL cholesterol who need to increase their HDL cholesterol levels [21].

• Avoid any cooking oil to burn above its smoke point.

• Buy cooking oil and store them in a dark, cool area.

According to the American Heart Association, replace bad fats like saturated fat with healthier fats such as monounsaturated and polyunsaturated fats as they are good for your heart. So, choose healthy cooking oils for preparing food such as safflower, sunflower, peanut, avocado and olive oil. Consume coconut oil and palm oil in moderation as they are high in saturated fats.