Eklavya wanted to learn archery in order to save the deer that were being hunted by the leopards in the forest. He pitied at their helplessness and thought he would help them. Guru Dronacharya was a master of archery and his skill was popular far and wide.

Eklavya went to Guru Dronacharya and requested him to accept him as his disciple. However, Guru Dronacharya was the teacher of the members of the royal family. He had taught Arjuna, who was also known for his extraordinary skill in archery. Arjuna was known as the 'Sarvashreshtha Dhanurdhari', meaning, the best archer.

Royal Family's Teacher Could Not Teach The Commoners

However, it was against the rules for a teacher of the royal family to impart his knowledge to anybody outside the royal family. The aim behind such a rule was that nobody should be a prince's or the king's equivalent in the same martial art. It was done just to ensure safety as the king is the saviour of his subjects. Eklavya on the other hand, was the son of a poor hunter. Therefore, Guru Dronacharya denied to accept him as a disciple. 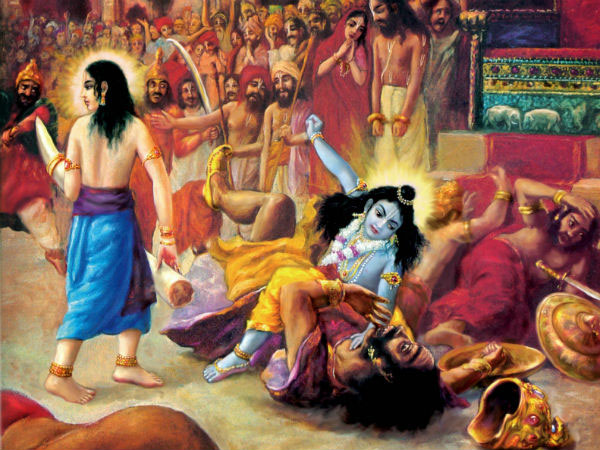 Most Read: How Lord Krishna Killed Kamsa: The Story Of Kamsa Vadh

Eklavya returned disheartened. He had already accepted Guru Dronacharya as his teacher in his heart. He carved a statue of his Guru, out of a stone, established it at a place in the forest and started practising every day on his own, in front of the statue. As practice makes a man perfect, he went on practising each day with perseverance, thus perfecting his skill. A day came when his abilities as an archer became even better than Arjuna.

When Arjuna came to know about this archer, he went to see his talent and was surprised to see him performing better than himself. He asked Eklavya who his Guru was, to which Eklavya replied, "Guru Dronacharya." A furious Arjuna, went to his Guru and accused him of cheating. He spoke about Eklavya. However, a confused Guru Dronacharya could understand nothing and wanted to meet the boy, whose name and skill he was completely unaware of.

Most Read: How Lord Krishna Helped Pandavas Win The Battle Of Mahabharata

Both Guru Dronacharya and Arjuna came to Eklavya's house. As the Eklavya welcomed them, he also took them to the place where he used to practice. In those days, it was a common practice to give Guru Dakshina to one's Guru as a present or fee for the knowledge gained. Therefore, Guru Dronacharya asked Eklavya to give his right thumb to him as Guru Dakshina.

Eklavya knew that archery without the right thumb was not possible. Despite this, he chopped his thumb off and gave it to his Guru. By doing this, he set a perfect example of discipleship. While Guru Dronacharya appears selfish and cruel here, there is another perception of the story.

As Sri Sri Ravi Shankar has also said, Guru Dronacharya uplifted the status of his disciple by taking the entire blame on himself. Eklavya's true devotion was commendable. By asking for his thumb, Guru Dronacharya not only preserved the state order, but also made Eklavya immortal, because a person who would otherwise be known only for his skill in archery, is also known for his true discipleship today and thus is immortal. Talking of Guru-Shishya (teacher-disciple) relationship today, people remember Eklavya.