Navratri is celebrated as the time when the Goddess had saved the world from the atrocities of the demon Mahishasura. Celebrating the victory of the Goddess in the battle which went on for nine days, devotees observe fasts for all these nine days.

The prowess of the Goddess is highlighted in the way she divided herself into nine invincible forms to kill the demon who was continuously multiplying with the drops of his blood falling down. The beautiful Goddess took a fierce form for the protection of her devotees. The story inspires us and strengthens one's faith in the divinity of the Goddess.

Here is the complete story of how the demon was killed by the Goddess. Read on.

Who Was Mahishasura And How Was He Born?

There was a demon king named Rambha. He had the blessings of Lord Brahma and therefore started a rampage of fear and destruction everywhere. The demon could change his form at will. Once, he met a beautiful woman and fell in love with her. Upon knowing that the woman was cursed to be a buffalo as well, and was therefore named Mahishi, he changed his form and became a male buffalo. However, since he did not have the immunity against animals, another male buffalo killed him and he died. Mahishi too killed herself by sitting on the funeral pyre of her husband.

However, Mahishi was pregnant when she decided to jump on the pyre of the demon, thus, from the fire, a demonic creature appeared who had the body of a human but the head of a buffalo. He was Mahishasura, another tyrant demon who would now replace the demon Rambha.

Most Read : Nine Mantras For The Nine Days Of The Goddess

The demon Mahishasura, to increase his powers, started performing various penances in order to please Lord Brahma. He sat meditating on Lord Brahma, stayed without food for years and stood on one leg, thus meditating on Lord Brahma. Gradually, ants started forming hills over his body and a mound soon covered his body completely. His penance grew so deep that all the three worlds trembled from the intense penance. Over time, Lord Brahma was pleased by his penance and appeared before the demon. The demon wanted a boon of immortality from Lord Brahma. However, Lord Brahma disagreed for any such boon, as immortality was not possible for a demon. Upon much requests from Mahishasura, Lord Brahma blessed him that no gods or masculine powers would be able to defeat Mahishasura. 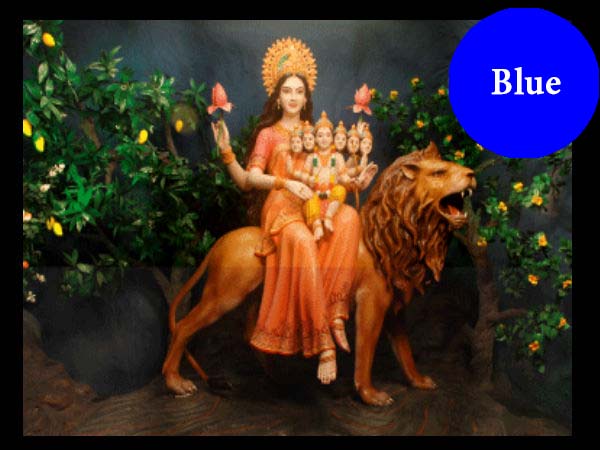 Most Read : Nine Colours For Each Day Of Navratri

The Origin Of The Goddess

In the reign of terror, the Gods feared that the demon would soon conquer the entire universe and therefore approached Lord Shiva. He, along with Lord Vishnu, Lord Brahma and the others had realised that the demon could never be defeated by a God because of the boon from Lord Brahma.

All the three holy trinity then decided to create a Goddess. Lord Shiva along with Lord Vishnu and Lord Brahma used their powers and created Goddess Shakti. 'Shakti' is a Sanskrit word which means power. Since the power of all the gods was united to form the Goddess, she was named Shakti.

Thus formed, the powerful Goddess, riding on a lion, marched towards the Himalayas. As Mahishasura got to know about a beautiful woman having arrived at the Himalayas, he sent his servants with a proposal for marriage to her. However, the Goddess challenged the demon for a battle and said that she would marry him if he could defeat her in a battle.

The Battle Between Goddess Durga And Mahishasura 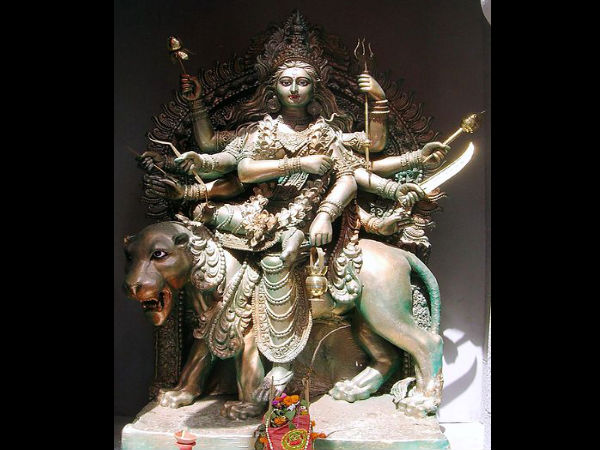 Most Read : Story And Puja Vidhi For Third Goddess Of Navratri

The Origin Of Navratri

These nine days came to be known as Navratri and the tenth day as Vijayadashmi. Navratri stands for the nine nights and Vijayadasami translates into the tenth day of victory. All the Gods praised her and named her as Mahishasura Mardini (the one who killed Mahishasura) for having killed Mahishasura. Every year, devotees observe the nine days fast, where they chant the entire Devi Mahatmya (the entire story of the Goddess) in one sitting. However, if doing so is not possible, the chapters can be narrated in the following order.

9th Day - Story of Surata and the merchant (Chapter 13)