The KASHISH Mumbai International Queer Film Festival is celebrating International Transgender Day of Visibility on 31 March 2021 with a daylong online programme of film screenings and discussion titled KASHISH Trans*Fest. There are four programmes under this event: International Shorts, Indian Shorts, a Panel Discussion and a National Award winning documentary.

The films are streaming on BookMyShow platform, and audiences across the world can access these programs at a very modest cost. Proceeds will be given to Tweet Foundation, a NGO in Delhi working for the welfare of the transgender community.

"This one-day festival of LGBTQ films from India and around the world highlights the life of Transwomen and Transmen, not only their struggles, but their small little victories in finding love and acceptance by families and society. We are happy to be doing our bit to support the Transgender community in India", said Sridhar Rangayan, festival director of KASHISH.

One of the films being screened is the documentary Ladli which recently won the National Award for Best Social Issue at the recent 67th National Awards. The director Sudipto Kundu exults, "At a glance Ladli is a story about an individual, but in a broader context it tells about the acceptance and adversity faced by the community from the society. It's beyond my expectation winning a National Award for my film. There is no better inspiration than this for any filmmaker in our country. I am happy to screen my film at KASHISH Transfest for the world to watch the film".

The day long festival also features a Live Panel Discussion that explores how corporate India is including transgender professionals at workplace and what more is required to create a more trans inclusive work environment and society. The panelists are transgender men and women professionals working with corporates, and NGO representatives focused on skilling trans people to be career ready. The panel discussion is being moderated by Anupama Easwaran from InHarmony, a Mumbai based Diversity & Inclusion consultancy.

Anupama Eashwaran said, "I started my journey of working with the transgender community three and half years back. One of the first events I attended during my research was the KASHISH QUEER FILM FESTIVAL where I watched this beautiful Kannada movie Naanu Avanalla...Avalu based on the life of the trans woman, Living Smile Vidya. This was also my first solo movie viewing experience and I had a gay couple to give me company in shedding tears almost right through the movie. This movie, the film festival and interacting with many wonderful people transformed my life. I met trans activist Abhina Aher here, who is today a dear friend and with whom I have worked on many trans empowerment initiatives, including the "Trans Is?" webinar series. Today, it gives me immense pleasure to collaborate with the KASHISH team and moderate a panel discussion on a topic that I am immensely passionate about. Life has turned a full circle with KASHISH!" 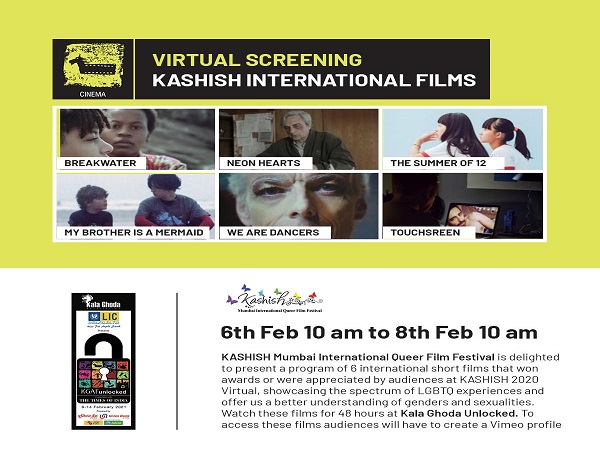 The event is brought in collaboration with InHarmony and Tweet Foundation as Community Partners. The 12th edition of KASHISH Mumbai International Queer Film Festival is scheduled from May 20-30, 2021 as an online event and will feature 150+ films from 50+ countries.