Exactly how Katrina and Taapsee had common colours at the green carpet of the IIFA 2017, the hairstyles of a few leading ladies of Bollywood were similar on the awards night too.

Though to look at, each of their hairstyles was unique and had a style factor to grab attention along with their outstanding attires, yet when noticed carefully, they had a common factor - the side swept hairstyle. 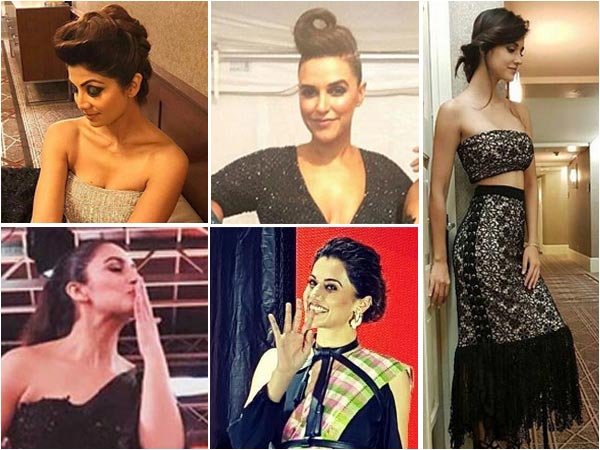 Five Hairstyles Of Bollywood Divas At The IIFA Fashion Show 2017

For some, the side parting ended in a bun, for some it was a ponytail and so on.

We bring to you, from the IIFA 2017 awards night, a list of five leading Bollywood actresses who opted for the side swept hair style and yet carried a persona very diverse from each other. Take a look!

Huma Qureshi: Side Swept With Messy Edge And Front Bang

The key highlight of Huma's hairstyle was the colour. She side swept her brown hair onto her right side and let the hair be open. At the end, the hair looked messy and bushy, though coordinated well on both the sides.

Preity Zinta: Side Swept With A Messy Bun

Not experimenting much, the pretty 90s heartthrob Preity Zinta had her hair parted towards the right while a bun was present at the left back. Some side bangs peeped from behind the ears and a fat bang covered little of her right eyebrow.

Nargis had a very simple hairdo for the IIFA 2017 ceremony. From the back, she had a short ponytail and in the front, a left side parting with a right side bang was opted by her. The distinctiveness in Nargis's hair was the golden streaks that you can see in the picture.

Coming to Disha, she had a side parting on the left side and a messy bun by the back. We call it retro style because the hair covered most of her ears. While taking a peek at her IIFA award night look, do not miss the thin side bang she opted for behind the left ear.

Very different from the rest of her IIFA 2017 hairstyles, on the awards night, Tapasee had her hair curled with a left side parting. Though spotted many times with this hairdo, for the IIFA 2017 awards night, we must say Taapsee looked phenomenal.