A quesadilla is a tortilla, usually a flour tortilla, but also sometimes made with a corn tortilla, which is filled with cheese and then grilled.

The filling can be vegetarian or non-vegetarian. The filling is usually of cheese plus you can add any kind of veggies or meat - like chicken or mutton. Here, chef MS Bhandari gives us a very easy recipe of the paneer quesadilla. Do make sure to have a look at it and try it! 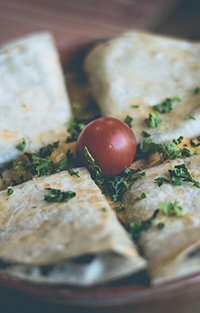 How to Prepare
Instructions
Nutritional Information