Copa Lolita is a dessert which is a cream caramel served with rum and raisin ice cream. Chef Sandeep Acharjee gives us a very simple recipe of the same.

We all love desserts - be it after dinner or when we feel low, or just about anytime in the world. To satiate your tastebuds, do try this recipe which has lots of ice cream and milkmaid.

You can serve this dessert in a small dessert glass as well. 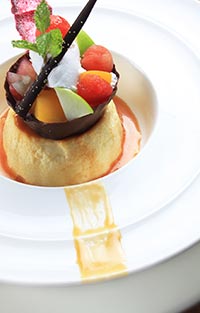