Amongst the great minds born in India who made a major contribution to philosophy was the uncle of the Pandavas and the Kauravas and the prime minister of the Kuru Kingdom, Vidura. He was a highly respected man who took the side of the Pandavas at the time of the Mahabharata War. Lord Krishna called him Dharmaraja for his dedication towards the welfare of the masses.

When Draupadi was humiliated by the Kauravas, he was the only one among those present in the court, to raise his voice against the Kauravas. When Krishna once visited the court of the Kauravas as a peace emissary, before the Mahabharata War, he preferred to stay in the house of Vidura instead of the palace of the Kauravas. Krishna was impressed to see that Vidura offered him food with no ulterior motive unlike the Kauravas, who wanted him to take their side during the war.

Vidura had once mentioned that one should stay away from certain people and friendship with those people become a major mistake of one's life. These people have been mentioned in the Udyoga Parva. Udyoga Parva refers to that part of Mahabharata wherein Vidura explains life lessons to Dhritarashtra. These lessons are collectively known as Vidura Niti. Here is the list of the people you should avoid. Take a look.

The first on the list are the addicts. Addiction can compel people to do what they should never do. People caught up amidst addiction might not think rationally and become a problem for themselves as well as others. While under the craving for drugs, people might forget the limits and end up doing something very wrong.

Their friends might have to suffer because of the mistakes of such people. Hence, it is advisable to stay away from addicts.

A Person Who Is Tired

People who are tired after working for the whole day are in the need of rest. If disturbed, they might get angry and say unwanted things to you or if they are tired mentally and are having had a bad day, they might even end up doing something really wrong.

Unable to think rationally with their tired brain, they unnecessarily indulge in arguments which do harm to everyone. Hence, it is better, not to disturb a person who is tired after a long day's work.

A Person Who Is Insane

Insane people might do weird things for they are unable to use their senses to the fullest. They cannot differentiate between right and wrong. Therefore, one must stay away from them. They might even harm a person physically, without realising the graveness of the act.

There are more chances of such people getting violent soon. It is advisable to stay away from such a person as well.

A Person Who Is Greedy

A person who is greedy knows no friends. Excessive greed might lead people to cause harm to their own friends and kins. In the name of friendship, such a person might cheat you or try to misuse you. Stories come up everyday about how people abduct and kill their friends for the sake of money.

Vidura had sensed the weakness and the behaviour of such people thousands of years ago. Therefore, he had advised that people stay away from such people. 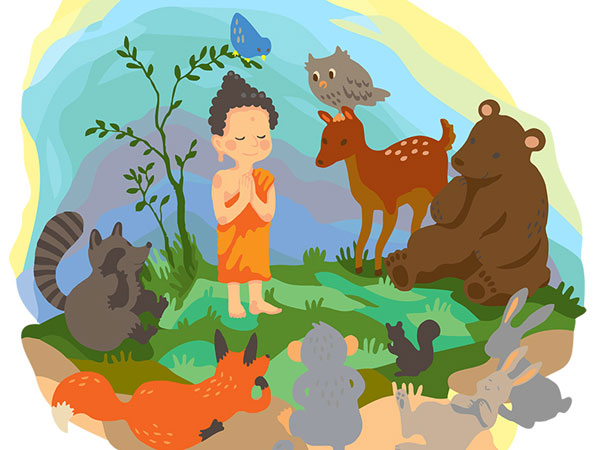 Lord Buddha And The Squirrel

A Person Who Is Angry

People in anger have no or minimal control over their actions. Anger has been described as the biggest enemy of a person. People under its effect harm not only others but themselves as well. Hence, one must distance themselves from quick-tempered people permanently, or at least for the time they are angry one must stay from them.