It is said that Lord Hanuman was an incarnation of Lord Shiva. It is believed that a very strong bond prevails between Lord Vishnu and Lord Shiva. When Lord Vishnu took the Ram avatar, Lord Shiva also appeared as Hanuman, and both saved the Earth from adharma (unrighteousness) spreading on it. Such diligently did Hanuman follow the orders of Lord Ram that he got the boon of staying immortal. With this blessing, Lord Hanuman protects his devotees in times of need.

When all the people offer their prayers to Lord Shiva in this month, Lord Hanuman too hears the prayers of his devotees more easily on Shravana Tuesdays. His worship can remove pain and suffering as well as all kinds of negative energies such as the evil eye effects and the fear of ghosts. He teaches us to live life as a brave and fearless being.

Today we are telling you some of the remedies that you can adopt on a Shravana Tuesday. This will please Lord Shiva as well besides pleasing Lord Hanuman.

Visit a Shiva temple on Tuesday, and perform Panchopchar pujan of Lord Hanuman. Panchopchar pujan refers to a puja performed in five ways or five steps. In this puja, the idol of the deity is first given a bath. Make sure the bath is given by the priest because Lord Hanuman was a celibate and women generally prefer not to touch his idol. After the bath, follows the decoration of the idol. Then flowers are offered to the deity. After this, the incense is lit to remove the negative energies from the surroundings. Then, after lighting the lamp, the aarti is chanted and the deity is offered prasad, also known as Bhog.

On any Tuesday during this month, pluck a leaf of a Banyan tree. Now wash it with clean water. Now place it before the idol of Lord Hanuman for some time. After this, you have to write 'Sri Ram' on it using saffron powder, which is used as tilak. Keep this leaf in your wallet and your wallet will never be empty at least until you do it on the next day. Again the next year, repeat this using a new leaf and immerse the older leaf in running water.

Ram Raksha Stotra In A Temple

Go to any Hanuman temple on a Tuesday during the month and sit and recite Ram Raksha Stotra there. Then offer jaggery and roasted grams to Lord Hanuman. Pray to him if you are going through any problems in life. 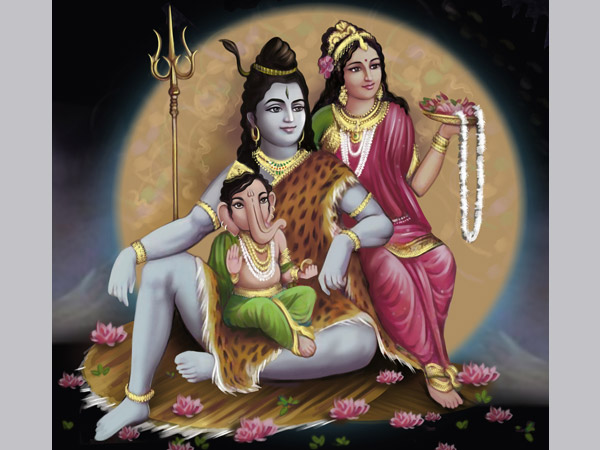 How To Get The Blessings Of Lord Shiva And Goddess Parvati Together?