Bakrid is celebrated in accordance with the Islamic lunar calendar. It generally falls on the tenth day of the month of Dhul-Hijja according to the lunar calendar of Islam. This festival is a very prominent festival of the Muslims. Muslims from every corner of the globe indulge in celebrating this festival with great joy. It is the second most important festival after Eid-ul-Fitr.

They commemorate the sacrifices that were made by prophet Ibrahim. Bakrid is also known as the day of sacrifice among Muslims. Muslims organize feasts and invite their friends and family and also exchange gifts with each other.

Bakrid And The Associated Legend

According to the legend, Prophet Ibrahim had been instructed by God to leave his wife and son in the middle of the desert. Ibraham did not hesitate to do so, and his family was saved by God. Later, Ibraham started preaching all the wise words of the Almighty. God again wanted to test how faithful he was, and he wanted him to sacrifice his only son Ishmael. Ishmael was also a great devotee of God, and he was ready to be sacrificed. When Ibraham was about to sacrifice his son, God was pleased and he saved Ishmael's life. Ibrahim's son was replaced with a ram, which was later sacrificed to God.

Things You Must Do On Bakrid

Muslims have to follow various rituals on Bakrid. They follow each rite and ritual with a lot of dedication during Bakrid which is also known as Eid-Ul-Adha.

Muslim men and women dress up in new clothes on the occasion of Bakrid. They purchase the dresses beforehand and keep them ready for the morning of this special day.

Going to the Mosque

After wearing the new dresses, the Muslims visit the mosque. They perform prayers, also known as 'Dua' and seek blessings from God in order to live a healthy, prosperous and happy life.

The Muslims recite Takbir in the mosques before they start praying to God and after they finish offering their prayers. Generally, the prayres are offered in groups, though not mandatorily.

Sacrifice is considered to be one of the most important aspects of the celebration of Bakrid. Generally, animals like sheep, goat, cow, camel, etc. are sacrificed on this day. The animals should meet certain proper standards. The animals are sacrificed after maintaining proper rituals.

After the animals are sacrificed, around one-third of the entire meat is offered to the poor, another one-third is distributed among the relatives and the rest is retained for one's own cosumption.

It is one of the most important rituals of the Muslims. They are required to distribute alms to the poor and the needy people.

The Muslims visit all their relatives and close ones to exchange the greetings of Bakrid. Bakrid is a happy celebration, and they even exchange gifts with each other.

After the animals are sacrificed, a grand feast is prepared by all the Muslims. This feast is also one of the most eminent rituals of the festival of Bakrid. Friends, family, and relatives enjoy the feast together to celebrate this great event.

The Muslim women prepare delicacies for the special occasion of Bakrid. These delicacies are served as dessert and kept for consumption for many days after Bakrid. 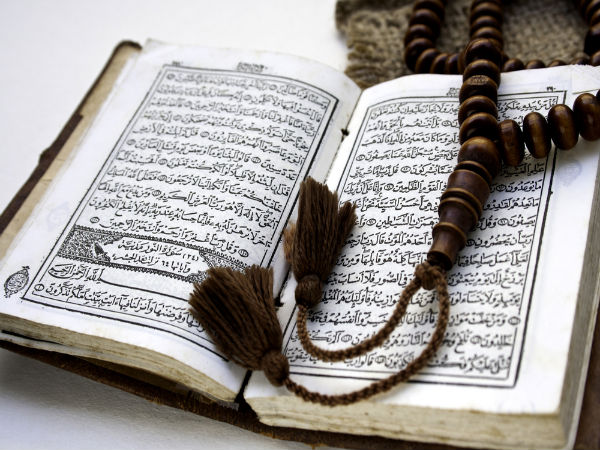 The Story Behind Bakrid

Praying at the end of the day

After the celebrations of the day are over, the family members come together to thank God for all his blessings.

Bakrid is celebrated with a lot of excitement among all the Muslims. Like all other festivals of Islam, especially the Ied-ul-Fitr and Bakrid are celebrated with all the complete rituals and rites.

Main Rituals And Traditions Of Bakrid