Festivals in India are often associated with the change of seasons. There are many festivals celebrated in India when a particular season changes. One such festival is Saraswati Puja, also known as Basant Panchami. The festival marks the end of winter season and the arrival of spring season. Every year the festival is observed on the fifth day of Shukla Paksha in the month of Magh. This year the festival will be observed on 16 February 2021. The festival is dedicated to Goddess Saraswati and therefore, people worship the Goddess while performing all the rituals. 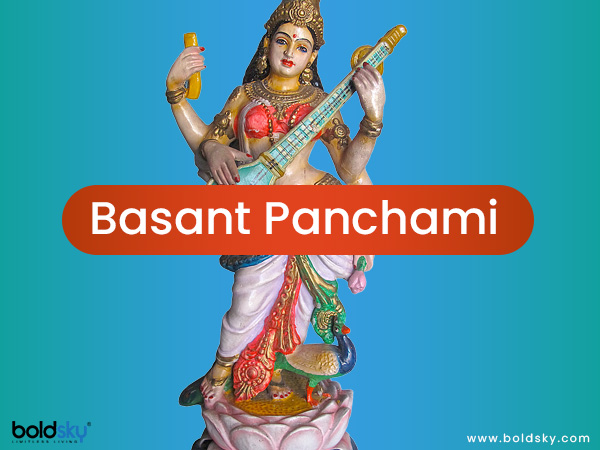 1. It is said that Goddess Saraswati originated from the mouth of Lord Brahma, the creator of the universe.

2. She originated to help in the commencement of the universe and spread knowledge, wisdom, music and positivity.

3. She is seen as a divine woman with aesthetic beauty, wearing white saree, having four arms, seated on a white lotus flower and riding a white swan.

4. She holds a Veena, a musical instrument in two of Her hands, books in Her upper right hand and a lotus flower in Her left upper hand.

5. Her four hands represent intellect, mind, alertness and ego. These four characteristics are said to be the four aspects of a human's personality.

7. Since the Goddess rides a white swan all the time, She is often known as Hansvahini, the one who rides a swan.

8. Her white complexion and white saree represent purity and simplicity. As a student, one should practice simplicity and purity in life to keep distractions at bay.

9. She plays the Veena which She holds in Her hands. The music produced by the Veena is quite melodious and this is what a person's words should be. A person should always say sweet and kind words. They shouldn't say any bad things to anyone.

10. Since Goddess Saraswati plays and holds Veena all the time, She is also known as Veenadharini, the one who holds a Veena.

11. Devotees of Goddess Saraswati offer Her white and yellow flowers, sweets and clothes.