Janmashtami, the birth anniversary of Lord Krishna and this year, it will be celebrated on 24th August, Saturday. It marks the day when Lord Krishna was born in the jail cell where his maternal uncle, Kamsa had kept his parents as captives. It is said that when Devaki, Kamsa's sister got married to Vasudev, a prophecy was heard that the eighth child of the couple would bring death to Kamsa. As he got to know this, Kamsa imprisoned both his sister and brother-in-law in Mathura, his kingdom. He would kill every child that was born to Devaki. It is said that their seventh child was mystically transferred to Rohini's womb, by divine powers, and he took birth as Balram, whom we know as Krishna's elder brother.

Krishna was born as the eighth child and soon after the birth, his father carried him to Gokul, amidst the heavy rains, to hide him at the house of Nanda. A girl was born to Yashoda, the wife of Nanda. She did not realize when the babies got exchanged and thought that she had actually given birth to a boy. The whole village of Gokul came to celebrate the day with Nanda family at his house.

The Auspicious Day Krishna Was Born

As per astrology, it was a very auspicious day when Krishna was born - the Ashtami Tithi during Krishna Paksha in the month of Bhadrapad. He was born at midnight, when Rohini Nakshatra (constellation) was set in the sky, Sun was in Leo and Moon was in Taurus. A child born under such a set-up of the stars is considered to be very lucky, not just for his own life, but for the society as a whole.

Along with this, here we give you some mantras that you can chant to please Lord Krishna on this Janmashtami. 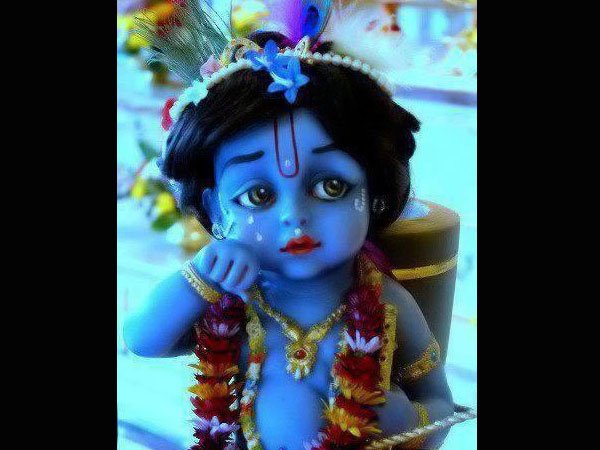 What You Should Not Do On Krishna Janmashtami?

Mantras To Chant On Janmashtami

This Mantra is known as Mahamantra, and it became popular during the Bhakti movement of Chaitanya Mahaprabhu, during the 15th century.

This mantra brings prosperity and fulfilment and is very beneficial for those who desire love marriage.

This mantra is believed to have been given by Lord Krishna himself. It brings happiness and removes all kinds of problems in life.

This mantra is also believed to remove all the problems that one might be facing in life.