The eighth incarnation of Lord Vishnu, Krishna has been described as the invincible, the divine form of God. The eighth chapter of the Gita says that he is in everything and everything is in him. Born on the eighth day during the Krishna Paksha in the month of Bhadrapad, Lord Krishna is worshipped as the primary deity in many Hindu houses. His birth anniversary is known as Janmashtami, also known by other names such as Krishna Ashtami, Krishna Janmashtami, Bhado Ashtami, Rohini Ashtami and Krishna Jayanti.

This year, in 2019, the festival will be celebrated on 24th August, Saturday.

According to the South Indian calendar, Krishna was born in the month of Shravan. However, the difference is only in the names of the months, as the day falls on the same date as per both the calendars.

Krishna Janmashtami this year will be observed on 24th August, 2019. This is believed to be the 5246th Birth Anniversary of Lord Krishna.

The festival of Dahi Handi will be celebrated on Sunday, August 25, 2019.

A Divine Child Was Born: Story Of The Birth Of Lord Krishna

From his birth to his triumph over the enemies, the life of Lord Krishna offers a lot to learn from. He has come as the saviour of the lives of his devotees a number of times. Events much before his birth had begun to indicate that a divine incarnation with supernatural powers was to be born on earth in Dwapar Yuga (one of the phases of mankind).

There lived a king, Kamsa who ruled tyrannically over the kingdom of Mathura. His oppressive rule over the world was continuing to become intolerable for his subjects. But the king dearly loved his sister Devaki. When Devaki got married to Vasudeva, a prophecy was made that the eighth child of the couple would bring death to his uncle Kamsa.

Kamsa, upon hearing this, got enraged and decided to kill all the babies that Devaki would give birth to. To ensure this, he made his sister and brother-in-law captives and kept them in a jail cell in his kingdom, Mathura.

Kamsa went on killing all the babies of Devaki until the seventh child (Balram) was mystically transferred to the womb of Rohini by the divine power. When the eighth child, who was to kill Kamsa, was born, Vasudeva secretly carried him to the house of Nanda, the chief of the village of Gokul, and replaced the baby with Nanda's newborn baby girl.

He thought Kamsa would not attack a girl child. But when Kamsa got the news of the eighth child of Devaki, a baby girl having born, he rushed to the jail and held the girl in his hands, to throw her away. The moment he tried to throw her, the girl escaped from his hands and rose to the sky and told Kamsa that the one who would bring him to death, was already safe in Gokul. She was the divine form of Goddess Durga, who took form just to aid in Krishna's escape.

On the other side, the birth of a baby boy to Yashoda, the wife of Nanda, was celebrated at his house, in Gokul. The child was named as Krishna and his birth anniversary is observed as Krishna Janmashtami today.

How Janmashtami Is Observed

People observe the festival by fasting where they stay on fruits and water for the whole day. Lord Krishna is given a bath with milk, ghee, honey, and water. The ritual of Dahi Handi is performed on the day after Janmashtami. People make a pyramid of humans and the person on the top of this pyramid breaks a pot filled with curd, hung at some height off the ground. 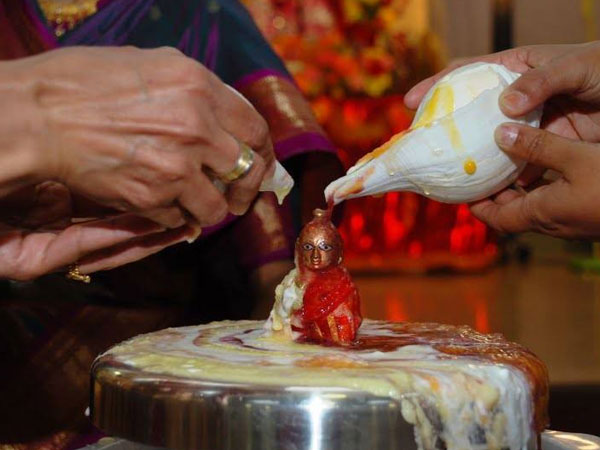 Incredible Facts About The Divine Krishna

This is done to mark the events when Lord Krishna, as a baby, used to steal curd like this, making human pyramids with his friends. Thus, the Janmashtami festival is celebrated with huge religious fervour, for two days, throughout the country.