The Power List 2019 event by VoguexNykaa Fashion was witnessed quite a few of the A-listers of the Bollywood industry in their dazzling best. Janhvi Kapoor was one such celebrity at the event. While we loved her white attire which quite fairy-like, we lover her hairdo way more.

Janhvi, who is usually seen in open loose waves or a chic bun, styled her tresses for the event in a rather elegant and fun hairdo. Her hairdo was a braided long bun. Let's decode her bun hairdo for you.

Her tresses were pulled back and tied into a braid. The braid was then folded in half and secured at the back, keeping the front side formal and the back fun. Two strands of hair framed her face at the front and helped balance the no-neckpiece look.

On the make-up front, natural and monochromatic make-up has kind of become Janhvi's signature look. It was a similar look but with a fun addition of silver glitter on the eyelids. Dramatic, perfectly curled eyelashes framed her beautiful eyes. Minimal base, filled-in brows, blushed cheeks and luscious lips stained in a pretty peach lip shade concludes her make-up. All-in-all, she looked stunning.

A similar make-up look was carried by the actress Radhika Madan for the same event. The main difference in their looks was the intensity of the colour. While Janhvi went for a glittery eyeshadow, Radhika went for a metallic texture. Also, Janhvi highlighter was subtle and natural while Radhika's is bold, beautiful and one you can't miss. Radhika Madan's loose waves made the looks different though. Here you see the impact a hairstyle can make. Janhvi's look is soft and flirty and Radhika's look is sensual and mesmerising.

We kind of did both these look. What about you? Tell us in the comment section below how did you like Janhvi's look and would you like to give it a try? 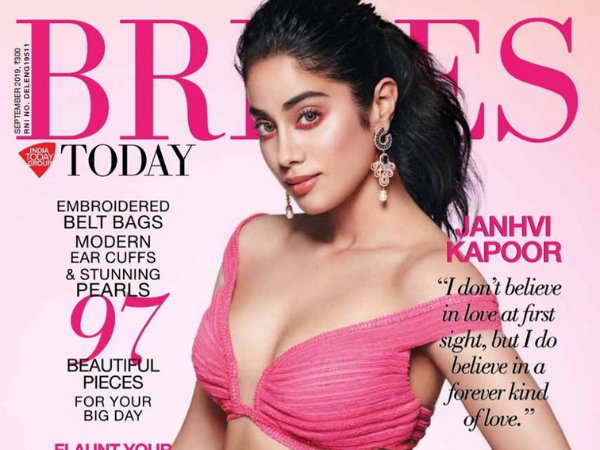